What a strange thing to be writing here again under these conditions. Pregnancy. Something I thought was long in my rearview mirror. Though in some ways I feel stupid to be surprised. I am a lazy charter. That's what happened to us when  we became perpetual avoiders against our will combined with sporadic if any ovulation. I only knew of one time I ovulated on my own, and I knew it the second it was occurring. I figured it was a rare event, ending in my most recent loss two years ago. So even "healing" didn't' mean total healing and wasn't to be. And yet, here I am again.

And while I am in a very familiar place for the 8th time, still some things are new. Like how late I tested, my best guess is P+18. I was near the time I should have started my period, and the only reason I tested was because I was packing for a spring break trip and then I saw the tampons. The movie, This is Forty, played in the next room and the main character is unexpectedly pregnant. I tested for no real reason, I keep them around sometimes to confirm I am not pregnant. But the line that appeared immediately was not the test line like I initially thought, but the other line. The pregnant line. Dark and fast. I checked to see if they were expired. No, but still CVS brand. No reason to get excited unless I confirm.

I still took the stick to my husband, lying on the bed. Held it out with no words, but when he looked at me I couldn't help but smile. But then ashamed of my goofy smile, I turned away, not knowing what to feel yet unable to stop smiling. "What?" he asked not fully looking. "Do you have a temperature?" While the colors of pink and white def resembled our thermometer, I had to laugh. This was too large, and much bigger of an event.

I told him I didn't believe it and was going to CVS for an expensive one. I thought it was open 24 hrs, but thankfully got there 10 min before it closed. It was confirmed. There wasn't much sleep to be had that night, despite the busy next day ahead.

I was supposed to work this Tues, though not the norm, to wrap up a work audit. Instead I called Dr. Hilgers and my local ob. I was happy to have quick responses back from both. A 1pm appt with Dr. Snider-there they confirmed the pregnancy and did Dr. H's stat HCG. Unfortunately we couldn't mail off the progesterone because the two labs in town no longer did it. I did find one that still did, but too late (St. Luke's South). I was able to get the prog suppositories and Prog in oil from the local CVS (non compounded, those are excluded from my plan). I had never started on both of those from the start, to my recollection suppositories only came once and later. HCG was called in, but I was told not to start it yet. And it was a pain to deal with. My insurance covered it but not really, subject to $5750 out of pocket before it was covered 100%. Before then nothing, so $1200. Kubats $275 was high and not welcome until later by comparison.

My HCG wasn't in until our plane landed in Surprise, AZ. 1100. A good number. A similar number to Charlie and Michael assuming the same time (my peak day I had identied was only 8 days prior and not likely peak so we were blind, going off first day of last period). 4 weeks 4 days is what we called it. My prog was 9, sad but not unexpected. i had no post peak support. I would hope it rises with all the  support, if not then it was time to worry.

The antibiotic was called in Friday (my pos test was Mon). It was Zith this time, new I believe. They said Dr. Toth usually supplements the IV with this, but it can be effective on its own and I know I am not immune to it. It was Thurs before I realized I was only taking one a day when the bottle said two. I could kick myself.

Dh had not much hope to start, what reason do we have to expect another outcome?But I feel unusually optimistic, even from the start. Maybe its the lack of numbers to spook me, I can't get any more HCGs, so I don't even know if it doubled (but assume it did, I only had one that didn't double, most triple right away and look great even my losses). My prog isn't due ago be drawn gain until Tues (today is Sat, I have known for almost two weeks and am over 6 weeks today). By then I will have had an ultrasound, though the doc himself is doing it so it often leads to more uncertainty. I will be 6 w 4 days and by then had strong heartbeats with both my living sons; however a day or two off and he could see nothing. So while I hope to be out of the woods by that appt, I more expect a wait and see, perhaps to confirm the worst.

I have symptoms beyond just the prog. Prog makes me tired and hungry. I take naps and go to bed early. I don't know if I took naps so much this early with others. I will try to see if I noted that. My chest is sore. But beyond that, I am winded and I know there is increased blood flow, something I don't think prog could ever mimic. It seems real.

There are some fears. I am 38 1/2 putting me higher risk and increasing my chance of DS. I wasn't on a prenatal so for once the risk of spina bifida is there. And what if healing this time means longer healing, but not total healing? Thus a 20 week loss? Or a 38 week stillborn? But those thoughts came and went once. They didn't really remain. I continue, with the exception of the very dreary dark weather day we returned from AZ, to be at peace with whatever. I have people praying-mostly those that are from out of state, but a few I know would really want to know and pray (Bekah, Becca, Ly). I had trouble telling others. My mom has a stress induced condition and would die to know I kept this from her as a result. I just told one of three sisters yesterday. I am not afraid to tell or not tell. It just seems weird. The words don't want to come out on the phone, in person, or any other way. I told my BF first. She missed my call and sent a text frantic it was about my mom. "oh no, mom is fine, no need to call. I am just pregnant". She called right away. Ha!

So that is the update on things. I pray the novena to St. Jude and St. Joseph daily. And I continue the Holy Spirit prayer asking to accept God's will. My friend who offered the St. Gerard relic when someone was done with it doesn't know, but Ly turned out to be the friend that has it. And she is due any day and told me she would get that to me. So that is an awesome Godincidence. :) I am continuing to wait and see and appreciate the prayers in the meantime and have been grateful for distractions like our trip, my work, and my family.
10 comments: 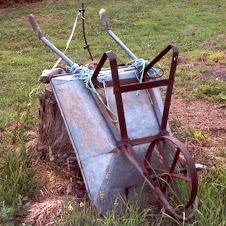 WheelbarrowRider
I am a Catholic, happily married (@28 in 2006), a mother to 4 saints in heaven and 2 boys born 10.8.08 & 11.11.10); I also have my PhD. I am trying to balance all of my roles. Our story of having our sons are absolutely incredible,& it only happened because we stopped trying to write it ourselves &let God take over. We realized having a baby wasn't the goal, or a right & that we really just wanted to follow God's will. We truly experienced spiritual healing; later physical healing followed. God is calling me to share what He has done in our lives with others to provide hope & encouragement, as well as to get the word out about authentic healthcare through the Creighton Model, also about trusting God in ALL areas of your life. My blog is part of that mission. When we ttc, I try to keep things in perspective on what can easily become a rollercoaster. My goal is to keep my faith & trust in God & keep the drama to a minimum. I have no desire for this to take over my life, cause me to neglect dh (or turn him into a object), or spend every last dime & energy toward this end. With faith comes peace. Thy will be done.

The recap is now a unique page. See my tabbed pages at the top of this page.

Holy Spirit, Beloved of my soul, I adore you. Enlighten me. Guide me. Strengthen me. Console me. Tell me what I should do. I promise to accept all that you deisre of me and accept all you permit to happe to me. Let me only know your will. Amen